*Some areas of the marine planning portal include restricted, sensitive or confidential spatial data and therefore are protected. 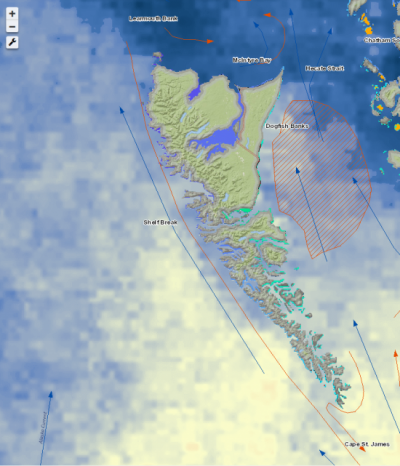 On July 17–18, 2012, HOTT and MaPP hosted a two-day workshop focused on marine future scenario analysis in Haida Gwaii. The purpose of the workshop was to explore:

The workshop involved sharing knowledge about climate change, island demographics/ economic development, fisheries, recreational fisheries, renewable energy, tourism, and transportation. Four future scenarios were considered and, based on the results of the workshop, a “preferred scenario” was crafted and vetted by Haida and provincial decision makers. This scenario is included in the final Haida Gwaii Marine Plan, and can also be downloaded separately below.

On January 23 and 24, 2009, about 300 people came together to discuss the future of the oceans. The forum was held at the Haida Heritage Centre at Ḵay Llnagaay. The proceedings are the result of two days of dialogue, debate and learning. This publication documents the concerns of islanders and reflects a desire to work together to improve the health of the oceans and communities. 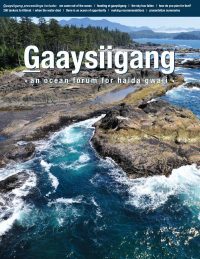 On March 1st and 2nd of 2019, 10 years after Gaaysiigang, over 200 local community members, oceans experts, planners and policy advisors gathered at Kay Llnagaay to review the progress made over the past ten years and continue the discussion on how Haida Gwaii can work together to collectively improve the health of the oceans and local communities. Over the two days, participants learned about and discussed international approaches, local concerns, identified challenges and proposed solutions. As a result of these discussions, forum participants developed the Gaaysiigang Sding/Sdang Declaration – the next chapter of Haida Gwaii’s oceans story.

When we work together, amazing things happen 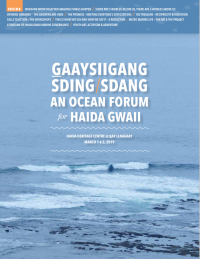 The Marine Economic Development Strategy for Haida Gwaii (June 2013) was prepared by Robinson Consulting and Associates Ltd. with assistance from Lions Gate Consulting Inc. The report was contracted by the CHN Marine Planning Program in 2012 to inform development of the Haida Gwaii Marine Plan.

The report focuses on four marine economic development opportunities: shellfish aquaculture; marine tourism; community fisheries; and, marine research and monitoring. A summary of the current status, SWOT (Strengths, Weaknesses, Opportunities and Threats) analyses, and a list of draft strategies for consideration are scoped for each identified opportunity. A draft of the report was shared with the Haida Gwaii Marine Advisory Committee  and the Haida Marine Work Group for review and input.

The CHN and provincial and federal governments are working together to create complementary marine plans for the waters surrounding Haida Gwaii. Seven marine planning processes are currently underway for Haida Gwaii. Although these processes are governed by different legislation and are proceeding on different timelines, the agencies involved are taking a coordinated approach.

Learn how governments on Haida Gwaii are working together in marine planning to promote Haida cultural uses, protect the ocean ecosystem, and support sustainable economies for coastal communities.

Learn how about species of concern on Haida Gwaii and best practices to stop these invasive species from hitchhiking to new places on your small vessel, large vessel or marine gear. 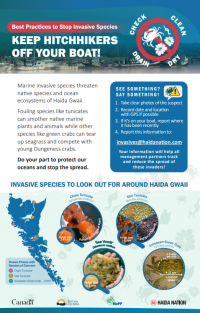 The draft Haida Gwaii ʹíináang | iinang Pacific Herring: An Ecosystem Overview and Ecosystem-based Rebuilding Plan is available for your review and comments.

The draft plan was co-developed by a Technical Working Group (TWG) made up of members from the Council of Haida Nation (CHN), the Department of Fisheries and Oceans (DFO), and Parks Canada Agency (PCA). The draft plan provides an overview of the Pacific herring ecosystem in Haida Gwaii, incorporating Haida traditional knowledge and implementing an ecosystem-based management approach. It supports objectives and targets laid out in the Gwaii Haanas Gina ʹWaadlux̲an KilG̲uhlG̲a Land-Sea-People Management Plan, and also meets requirements under the new Fish Stocks Provisions in the amended Fisheries Act.

The draft plan proposes some key changes to the management of herring in Haida Gwaii including:

Comments on the draft plan can be submitted here until December 16th, 2022.

Appendices with additional information that support the draft plan can be found here.

If you would like to discuss the draft plan with the Technical Working Group, please contact any of the following TWG members to set up a meeting: 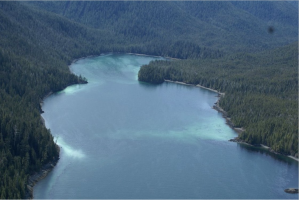 The large format poster includes over 500 Haida names for ocean and freshwater bodies, settlements and supernaturals. The brochure complements the map and is a brief summary of the Haida Marine Traditional Knowledge Study. 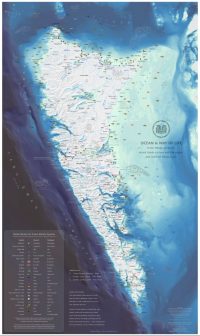 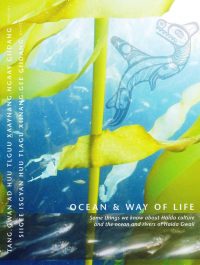 The Haida Marine Traditional Knowledge Study researched and documented Haida culture, traditions and knowledge about the ocean. Fifty-six Haida shared their knowledge of food, fishing and gathering areas, seasonal harvest patterns, sites of cultural and historical importance, and observations about species abundance and population trends. More than 4,000 locations and 150 marine species were recorded, with oral accounts and first-hand observations dating back to the 1920s.

This strategy was prepared by a group of island residents in 2003 and presents objectives and actions to both protect and support key elements of Haida Gwaii’s unique heritage, including: (1) the relationship between healthy ecosystems and the island way of life; (2) a deep and profound respect for Haida culture; (3) a strong determination to preserve the unique island way of life; (4) an inspired relationship to place; (5) community integrity and the importance of that which is local.

The Haida Gwaii Marine Plan contains a strategy (Sec. 7.1 Strat. 5.1B) for applying the principles and direction of the Heritage Tourism Strategy, and endorses other island-supported tourism guidelines in developing a marine tourism industry on Haida Gwaii.

"Lessons from the Simushir" Workshop

On May 12-13, 2015, the Haida Nation hosted a workshop at the Haida Heritage Centre in Skidegate to discuss the Simushir incident and identify “lessons learned.” This workshop brought together experts in marine emergency response, Haida, coastal First Nations representatives, and other Island residents to learn from one another and to address topics such as decision-making protocols during an incident, internal and external communication policies, marine response capacity, and the future development of Geographic Response Plans. Workshop participants made a number of recommendations to improve the current accident prevention and emergency response system in the north coast region, including Haida Gwaii.

On June 17th – 18th, 2014, HOTT and MaPP hosted a two-day workshop focused on Geographic Response Plans for Haida Gwaii. The purpose of the workshop was to discuss: current levels of shipping and vessel traffic and their routes; risks posed by current levels of shipping and vessel traffic; existing response capacities in the event of marine pollution events; and institutional challenges to increasing response capacity through a coast-wide Geographic Response Plan. The workshop included presentations by emergency response specialist Stafford Reid (EnviroEmerg Consulting) and Graham Knox (BC Ministry of Environment).